Unifont.org
Welcome! This site provides links to various projects that I have pursued over the years. Many of these projects are related to my interests in languages like Nahuatl , digital fonts and non-Latin orthographies such as Tai Tham. However, I've also done important work on pedigree visualization andpoorly-characterized red oak taxa in Michigan, among other things. Here there is also some older information about Unicode fonts, Unicode software, internation­alization, and usability issues on free/libre/open source (FLOSS) operating systems. Scroll down to see what I've been up to!

During the Fall semester of 2015, I and several colleagues took an introductory class in modern Eastern Huasteca Nahuatl offered through the Center for Latin American & Caribbean Studies (LACS) at the University of Michigan in Ann Arbor, Michigan, USA, and taught via web technologies by Prof. Eduardo de la Cruz Cruz of the Instituto de Docencia e Investigación Etnológica de Zacatecas (IDIEZ) at the Autonomous University of Zacatecas in Zacatecas, Mexico. During the semester, I developed an effective abugida for writing Nahuatl in my own notes and flashcards. I now use this system for all my hand-written notes and field work ... read more ...

This tool can convert Nahuatl written in any one orthography into any other orthography. A number of well-known orthographies are currently supported, including the Andrews-Campbell-Karttunen (ACK) and the Secretaría de Educación Pública (SEP) systems. The tool can even correctly convert a number of older colonial variant spellings. For example, try pasting in something like “yniqueyti ytoca gadalina çivato ya chicuaçexivitl” and watch it be instantly converted to ACK, SEP, Hasler Modern, and my own abugida-based orthography. Or type something in Nahuatl yourself and watch what happens. Try it now here!

In 2017, I collaborated with Dr. Stephanie Wood of the University of Oregon and Dr. Gordon Whittaker of Göttingen University to spearhead the creation of an Aztec Glyphs cataloging and analysis project. Here is a link to the talk I gave at our workshop in March, 2017. 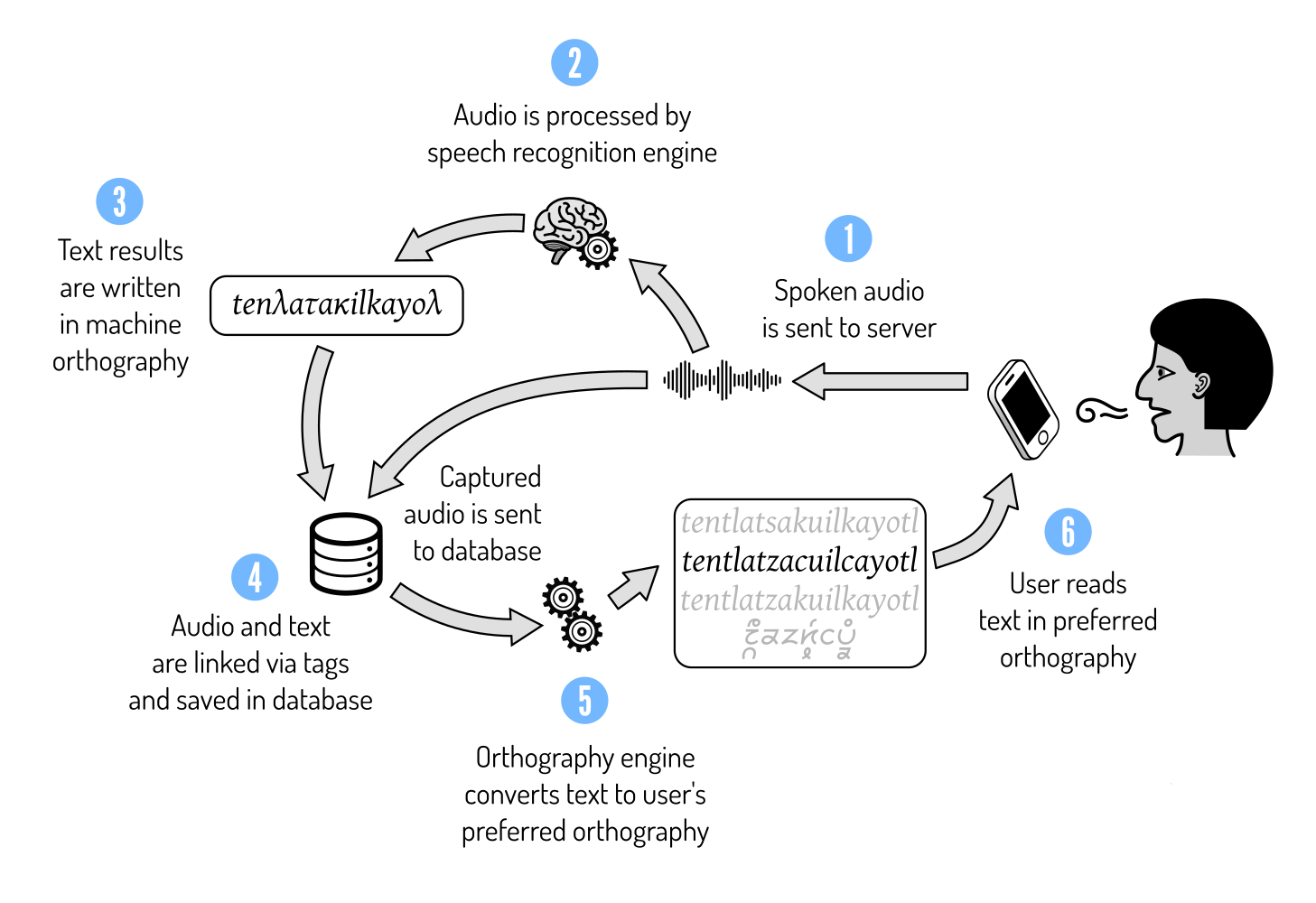 There are somewhere between 1.5 million and 1.7 million speakers of Nahuatl in Mexico today, making Nahuatl the most widely spoken indigenous language in Mexico. However, multiple forces have contributed toward a rapid decline in usage of Nahuatl by native speakers in many parts of Mexico and the language is now widely considered endangered. The ideological policies of castellanización that began after the Mexican Revolution engendered conflictive and racist attitudes against indigenous language speakers. More recently, patterns of globalization, internal migration to urban areas, and climate change are accelerating shifts in language usage and language prestige, especially among younger generations of Nahuatl speakers. While the modern world presents numerous challenges to the vitality of indigenous languages in general, it also provides opportunities for new and creative responses. We propose the creation of a crowd-sourced mobile app of modern Nahuatl variants that will help speakers to learn and revitalize Nahuatl, preserve local cultures against the onslaught of hegemonic state colonialities, and communicate indigenous narratives and worldviews in their own words. Click here to read the draft proposal.

For centuries throughout the northern regions of Southeast Asia in the Xishuangbanna (西双版纳 สิบสองปันนา) region of Yunnan in China, in the Lanna (ล้านนา) region of Northern Thailand, in the Shan state (รัฐฉาน) of Myanmar around the city of Kengtung (เชียงตุง) and in Laos, the Tai Tham script (อักษรธรรมล้านนา หรือ ตั๋วเมือง) has been used extensively to preserve important religious and cultural texts. In Buddhist monastaries throughout the region, texts in Sanskrit, Pali, and local Tai (傣 ไท) languages were traditionally written on palm leaf manuscripts (贝叶经 คัมภีร์ใบลาน) or folded sa paper (พับสา) ... read more ...

A talk about the Hariphunchai Unicode Tai Tham font project that I gave at the Libre Graphics Meeting in Leipzig, Germany, in April, 2014. Click on the YouTube video of the talk below, or see the slides here.

Key Curry is a web application and set of web components that allows you to easily type many world languages and specialized orthographies on the web. Key Curry makes it easy for language advocates and web developers to develop specialized keyboard layouts or input method engines to provide support for orthographies of minority languages or for other specialized orthographic tasks. An introduction to Key Curry is available here. Key Curry comes with numerous key maps and input method engines, including a relatively intuitive method for the International Phonetic Alphabet (IPA), several methods for African languages, and a number of methods for East Asian languages. You may access Key Curry here.

This is a now rather out-of-date guide to Unicode-based fonts for free/libre/open source (FLOSS) operating systems. Preference was given to high-quality vector fonts released under SIL International's Open Font License (OFL), the Free Software Foundation's GNU General Public License (GPL), and similarly open licenses. Although this document focused on fonts that worked well on free operating systems a few years ago, nowadays these fonts will work well on any modern operating System, including Windows and Apple OSX. Access the Font Guide here.

Computers assign numbers —called code points— to represent letters. Prior to Unicode, there were hundreds of national and ISO standards in existence for the encoding of modern language scripts. Many of these legacy encodings were limited to 256 ( i.e., 28 ) code points. Back in the day, this resulted in numerous problems. A major problem was that 256 code points were frequently not enough even for a single language, much less multiple languages. A second rather obvious problem was that code points set aside to represent letters in one national or ISO encoding would unavoidably be re-used to represent completely different letters in some other national or ISO encoding. This resulted in unreadable emails, mangled web pages, and garbled databases. Fortunately, Unicode came along to solve the problems of multiple encodings by assigning unique code points to the letters and ideographs of (nearly) all of the world's modern language scripts and commonly used symbols. Nowadays it is much rarer to encounter problems, but many software developers are well-aware of issues that still occur and some of the hoops one needs to jump through get things to work the way they should. Although this Unicode Primer is dated, it still contains valuable information that may help you avoid pitfalls. Access the Unicode Primer here.

Fontaine showing what is missing from a font.

Fontaine is a command-line utility that I wrote a few years ago for the Open Font Library project. Fontaine displays key meta information about font files, including but not limited to font name, style, weight, glyph count, character count, copyright, license information and orthographic coverage. One of the most useful aspects of this utility is its ability to tell you what is included and what is missing from a given font. This is especially useful for scholars, graphic designers and anyone who needs to know about the specific coverage of a font before they decide to use it in their projects. Read more about Fontaine here.

A technical drawing of a female oak inflorescence illustrating
some of the morphological characters measured in the study.

The taxonomy and range limits of scarlet oak, Quercus coccinea Muenchh., and northern pin oak, Q. ellipsoidalis E.J. Hill, in the Lake States have been much debated, and recent authors continue to arrive at different conclusions regarding the segregation of these two taxa. The problem is compounded because Q. ellipsoidalis has also often been confused with northern red oak, Q. rubra L., and black oak, Q. velutina Lam. An ecosystem approach was used to investigate the morphology of the two well-characterized taxa, Q. rubra and Q. velutina, in relation to the poorly-characterized Q. coccinea in southeastern and northern Lower Michigan. Q. ellipsoidalis is hypothesized to be a northern, smaller-fruited race of Q. coccinea. To test this hypothesis, characters thought to be most conserved in evolution -flowers, fruits, and terminal buds- were examined in order to establish baseline references for distinguishing Q. coccinea, Q. rubra, and Q. velutina. Populations of each taxon were then examined to document differences along a south-to-north gradient. Access the thesis here.

A sample pedigree drawing created by the Madeline 2.0 software.

Madeline is a pedigree visualization software program designed to handle large and complex pedigrees with an emphasis on readability and aesthetics. There are three versions: ① the original command-line version which has many unique features for handling pedigree data and produces output in the PostScript format; ② Madeline 2.0 Pedigree Drawing Engine, a command-line program with many new and useful pedigree drawing features, including scalable vector graphics (SVG) output and options to facilitate integrating Madeline into web applications; and ③ a new fully interactive version being developed for tablets and handheld devices (which also works just as well on a desktop computer).

Although the new version for tablets and handheld devices is still just a prototype, it sports some great features that we think will revolutionize pedigree drawing within clinical and medical research settings. Check out the video below for a tour!

A video introduction to the Madeline prototype tablet application.

An experiment in vertical text layout.

Text on computers is almost always displayed in horizontal rows which are read from top to bottom. However in East Asia, text was traditionally written in vertical columns from top to bottom, with progression from right to left. This style of writing is called tategaki 縦書き in Japanese and zongpai 縱排 in Mandarin Chinese. The tategaki style remains quite popular today in printed works in Japan and even in newspapers in places like Taiwan and Hong Kong. What would it take to achieve vertical text layout in a web page? Back in 2011, I decided to do an experiment to answer that question. Read more here.

An accident victim injury map generated by the Vanessa application.

Vanessa is a sophisticated database application that I wrote for the International Center for Automotive Medicine (ICAM) at the University of Michigan Health System. The application is used to track and report a variety of data related to patients injured in automobile and vulnerable road user (VRU) accidents. The application has many unique features, including the ability to automatically generate schematic maps of accident victims’ injuries directly from medical injury report lists (example at left).Click here for more information.